Plugin is constantly under the development. It means that in every update the plugin comes with new feature and fixes. One more important thing is that the new update can also come with the plugin API refactor. Plugin structure, method and classes names can change. Of course, it will be described in the  Version Notes.

It is important to stay up to date, since in the update you are getting not only new features, but also important fixes and updates to support new OS / Unity versions. However, the constant plugin update is not required. If you are satisfied with the current version and do not want to spend some time on updating procedure, you can stay with this version as long as you want.

1) Completely remove the old plugin version from your project. You can do this automatically as shown on the screenshot below. 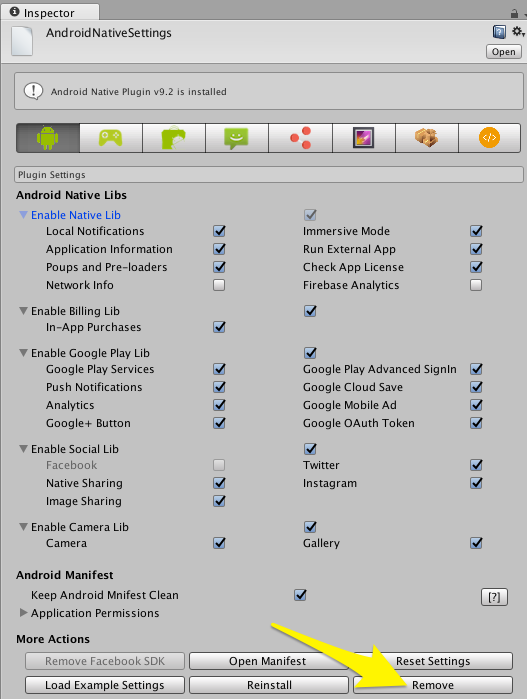 1. When you are removing the plugin, your project files, and plugin settings will stay unharmed, which means that you do not need to fill up the plugin editor settings again after an update.

2. If you have more than one Stan's Assets product in your project, it will be removed as well. Such behaviour was designed in purpose. Stan's Assets products are fully compatible with each other, but to achieve this compatibility you should use a version of the plugins which are released at the same time.

You can't just update Android Native to v6.8(released 10 Aug 2015 ), you need to update other plugins as well, so after updating you should have the following plugin versions:

Plugins Settings file is located at:

This folder remains unharmed by the plugin removal tool. If you want to transfer setting to the another project, you can just copy  / paste files from this folder from one project to another.

If you want manually to remove and reinstall this plugin, or even if you also have nother Stan's Assets plugins inside your project, you can just remove the following folders: