Example of the network architecture with an authoritarian server in Unity

Considering the facts that

I started moving in one direction – authoritarian server. It means that all game events, from turning to causing lots of damage, are solved and executed by the server solely. A player can only ask the server to execute their intensions. This approach allows to eliminate plenty of cheaters and hackers, which do magic with the client code and meddle with it. Of course there’s lots of other cheating methods but we won’t pay attention to them.

Make a project, which will implement the authoritarian architecture.

In this project I don’t organize connection sessions – there’s plenty of Unity “for dummies” methods out there.

In this project I won’t tell you which keys to press. A reader, who doesn’t know how to follow given actions in Unity, isn’t really a good enough for this article.

In this project I am not going to care about the process physics, aerodynamic calculations etc. I’ll only show you the order of the network users’ interaction.

The output should consist of a detailed and transparent executive example, which will show how a client interacts with the server.

For this purpose I had to work on my own terminology. Without the terminology I couldn’t pull the task off.

Server – the place where the code, which serves other people, is executed. Usually user can’t physically touch the server’s console (input controller).

Host – the place where the server code is executed, but one of the players is playing there simultaneously. No one usually takes a closer look at this mode. That’s why understanding of this mode consists of the bunch of believes on how a server and a client work.

Client – the place, where the code, which is related to a particular player, is executed. Roughly speaking it’s your computer.

Unit – a game unit that represents a player in the game space – the character.

Unity architecture is made the way that it is easier to try and write one script to control one unit than try and write 3 different scripts: the first – to control yourself, the second – for the server to represent your gaming personality, the third – for the other player on my computer.

“I”, “my” – the code that takes my intensions directly through the console, joystick etc.

“Spirit” – the code that is executed on the server and only this code can implement the game solutions.

“My spirit” – the code on the server, which transmits my intensions into the actions on the game area.

“Somebody else’s spirit” – the code, which implements someone else’s intensions on the game area respectively.

“Avatar” – the code that reflects actions of any player on my (or somebody else’s) screen.

“My avatar” – the code that reflects the actions of “My Spirit”. “I” myself is “My Avatar”.

We will write one single script that satisfies all the roles. Why one same script? Just because we drive on similar or comparable tanks. You wouldn’t make me write one code for T-34, another code for Panzer 4, and another for Sherman Mk.IVAY, would you?!

Sorry for making up such a weird terminology but after lazily skimming through the topics of multiplayer development during a year I realized that this kind of terminology didn’t exist. But attempts to explain using existing terminology aren’t usually understood easily by people. 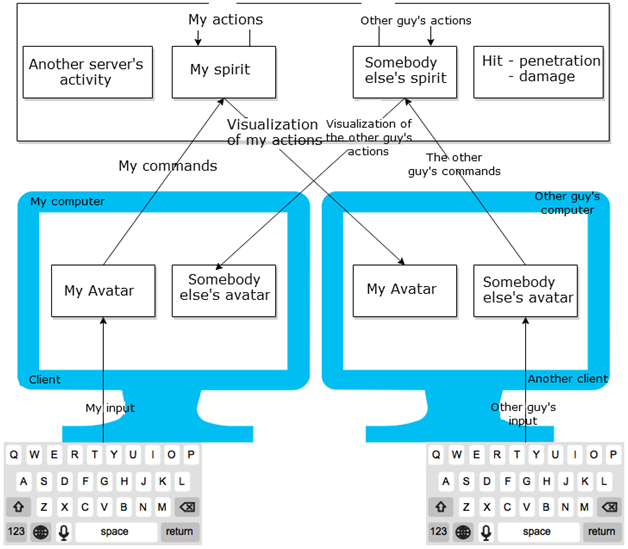 So. As I said earlier I decided to write one script for “Myself”, “My spirit” and “My avatar”. And also for “That guy”, what is ubiquitously recommended by Unity documentation.

So… are you ready? 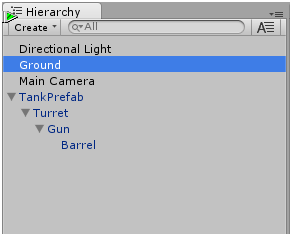 We’re going to take our bearings on this article docs.unity3d.com/Manual/UNetConverting.html, but just take the bearings. We will have differences.

The isServer variable means that this copy of the script is executing on the server and in this case it is “my spirit”.

The variable isClient means that this copy of the script is executing on a client and in this case it is someone else’s “avatar”.

The isLocalPlayer variable means that it is “my avatar”.

Cmd kind of functions have Rpc kind of functions as a callback. The Rpc functions are called by the server and are executed on the clients’ computers. Here’re some more syntactic requirements: the function should have a [ClientRpc] mark and its name should start with “Rpc”. The server sent us new coordinates that it got from our speed requirements and we should move our unit to a new place.

Here we could put a smooth approach to the point in order to avoid any tank jerks on the screen, but we won’t be distracted.

We can make sure that both tanks go well, sync smoothness for this kind of a project is more than acceptable.

But you might say “Stop! We have implemented just the forwards/backwards movement! Where’s the rotation of both tank and turret?

And here’s my answer:
Rotation of the tank, turret and barrel can be implemented absolutely identically to the forwards/backwards movement.

Why did I implement the network exchange the way I did and why do I put this “fake” out?

Just because the tutorials for the new system uNet are pretty slender yet and there’s a really scanty amount of them. And the methods, which they tell about, can’t turn the tank parts, just the whole tank.

But in this article we examined (I hope so) clear logic of how a network works, which is valid for the tank’s parts movement and for the smoke, and the damage, and the very shots.

That’s the way it is.