Before you can use Saved Games API you need to enable API under the Game Kit service, as shown in the screenshot below. 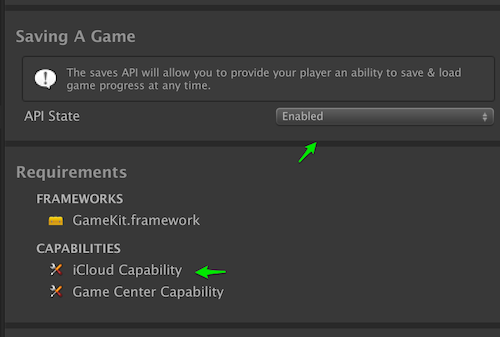 Currently, the saved game API is best used for single-player games or a pass-and-play game on a single device. Only the local player is required to save the game and any device can be used to retrieve the saved game information. Turn-based games already have a saved state as the turn is passed from one player to another and real-time games require all players to be present any time the game is played and only a single player can save the game.

When implementing saved games in your app, you must keep the following information in mind:

Saving games using the saved game APIs requires the user to have an iCloud account. Using iCloud provides users with a way to save a game from any device that has an Internet connection. Along with providing the ability to save games from anywhere, iCloud provides users with the ability to save large data files. The size of a saved game file is limited to the amount of space in the users iCloud account. However, you should always strive to minimize the amount of data being saved. This prevents the user from running out of space and decreases the amount of time required to fetch or save a game file.

Today’s games are played on multiple devices depending on where the user happens to be. Whether they are at home playing on their iMac, sitting in front of a television with their iPad, or on a bus with their iPhone, a player wants to continue playing a game from the last place they left off and not have to worry about which device they were playing on. Including the ability to save and retrieve saved games greatly increases the playability of your game.

It is up to you to decide how and when users can save a game. If you want your player’s to consider each action before performing that action, then you might want to only allow a single saved game file. However, if you don’t mind your players going back and trying different actions, then allow the player to name and create several different saved game files. In either case, it is up to you to create a save game mechanism for your app.

After the player creates a newly saved game file, use the SavedGame method of ISN_GKLocalPlayer class to save the game data to iCloud. If there is already a saved game object with the same name, the new saved game data overwrites the old saved game data. Otherwise, a new ISN_GKSavedGame object is created and saved.

After you have resolved any conflicts, present the list of saved games to the player, if applicable. The player then selects the saved game file they wish to continue playing. Call the LoadGameData method to retrieve the data associated with the ISN_GKSavedGame object chosen by the player.

With users having multiple devices, it is not unusual for a player to be playing the same game on different devices at the same time. Because of this, it is possible to have multiple saved games with the same name and from different devices. It is up to your app to find any conflicting games and fix the conflict.

It's recommended that you handle and subscribe to the saved game's events that can occur during your app lifetime. See the code snippet below:

When you need to delete a saved game, simply call the DeleteSavedGame method as shown on example below: